Two blokes entered the pub for a drink, called the proprietor over, and asked him to settle an argument. “So, are there two pints in a quart or four?” they asked him.
“Two pints in a quart,” confirmed the proprietor. They moved to a table and when the barmaid asked for their order, told her, “Two pints, please, miss, and the bartender offered to buy ’em for us.”
The barmaid doubted them and told them so. “My boss? That would be a first for that tightwad!”
One bloke called out to the proprietor across the room, “You did say two pints, didn’t you?”
“That’s right,” he called back. “Two pints!”

In december they will visit Chennai.
http://www.kellogg.northwestern.edu/admissions/visit/receptions.htm#asia 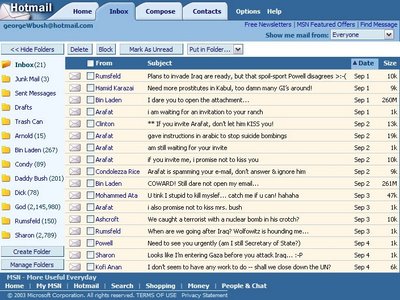 Its any CEO dream to be able to for at least once get rid of all the competitors so that his company rules the market alone. He will no longer have to hard sell both to the distributors (or associate companies), as well as to the customers. Margins could be increased and adverting and campaign costs be trimmed down. No longer will it have to involve itself in predatory pricing and cost cutting just to maintain the figures. The best talent will no longer be poached and he will no longer worry about the market shares. In short anything and everything they produce will be selling like hot cakes.

However struggle is the nature’s way of strengthening. Fight to survival keeps the animals in open forest healthier than those in the captive zoo. Monopolies lead to an irresponsible and inefficient management. The collapse of the eastern European economies could be attributed to the unimaginative management. Government controlled multi-billion dollar corporations flourished under communist control where there was no competition. However with economy opening up these Behmoths had to pack their bags and shut shops. The competition ensures that new innovative products keep coming, needs of the consumers are met and the companies diversify into new emerging zones. Investments are made in technology to keep the company abreast if not ahead of the time. In short the company does not lose its cutting edge and is prepared for any battle it has to fight in the market place.

Companies have a tendency to overspend. Inefficiencies and corruption creeps in. Millions are wasted away in lavish offices and private jets when times are good. Only an formidable adversary will spur the management to undertake cost cutting to keep the company fit and get rid of the unproductive assets.

Government and courts have a dislike for monopolies. They slap heavy taxes and penalties on them (Microsoft) and even sometimes chop these giants into smaller sister concerns (like AT&T) which will eventually have to compete against each other. Management would prefer to fight against an enemy rather than its own other half. Media also openly bad mouths Goliaths and portray them as predators and robbers. Presence of an adversary is important for the image of the company and for it to be in the good books of government and media.

In this era of IPR, patents and exclusive contracts, the management and the share-holders tend to project that having an exclusive right in an territory or technology is their only guarantee for a bright future, but times are changing and so are the consumer requirements. Aluminum was 270$ an ounce a couple of decades ago and now that same metal would be worth a couple of cents. Every house used to have a gramophone, but now only antique shops and museums keep them. Had there been no competition, the companies in these sectors would have closed. Instead of gramophone companies now making disk players or aluminium companies making aircraft parts. A little bit of competition is required for survival.