According to this week’s Economist, the tax rate in India is the second highest in the world. 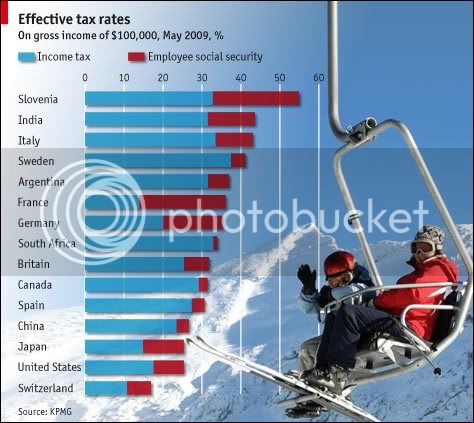 All this when we know that there is no Social Security system in India:
1. Government schools are a mess
2. Not even the poor want to go to the government hospitals
3. Lets not talk about the public transport system
etc etc
India has the world’s second highest saving’s rate (after China), and yet government’s borrowing is out stripping the supply.
When I couple these news with the fact that Fiscal Deficit is now a 2 digit figure (in terms of percentage of GDP), I wonder where is all the money going.

maybe directly correlated to why our govt is least bothered to investigate hawala and swiss and caymen accounts
ps if ajwani could garner crores what about our aam politicians?

In India, should Employee Social security be considered a part of the tax?
It is after all the Provident Fund?

However the tax rates are high but compared to what.
Whats our per capita income? compare that with the rest of the countries and you will see the difference as well.

in other countries they have a social security system…. a part of the income tax you pay comes back as retirement funds…. ow is it any different?